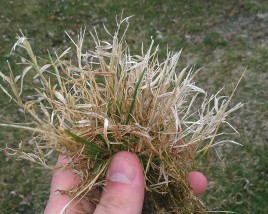 At this time of the year as we are starting to move into the warmer weather of the spring, lawns and certain plant varieties are beginning to green up and come out of dormancy.  This is the time when homeowners are noticing brown patches or discolored sections of their lawn.  We learned about Snow Mold last week, where affected turf gives off a brown, matted appearance.  This week’s topic is Nimblewill (Muhlenbergia schreberi).  This plant goes dormant in the early fall and does not come out of dormancy, or “green up”, until the late spring.  When dormant, the plant has a brown/dead appearance which can be a concern to an untrained eye. 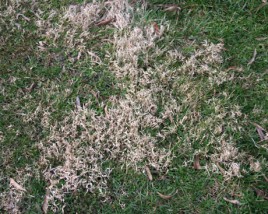 Nimblewill is a warm-season perennial grass, which means that it will come back year after year, as opposed to an annual plant, which completes its life cycle in one year.  Nimblewill has a wiry, pale or light green appearance.  The plant spreads via airborne seeds that are produced in the summer to early fall, but it also spreads through the travel of its above ground stem system, which is called a stolon.  Many other grasses stem structure lies below the soil surface, these are called rhizomes.  Due to the fact that nimblewill has stolon’s, these patches can grow and form circular areas that can be anywhere from 1 foot to 3 feet in diameter.  Nimblewill will grow in both high sun and high shade areas, but like most weeds, it is extremely successful in establishment in areas that are very thin/bare or low in quality turf density.  During the majority of the summer season, nimblewill maintains a green color which will help it to blend in with the rest of your turf, it is the time frames when it is dormant and brown that make it unsightly in the lawn.  These times when it is dormant (early spring and fall) are the best time to try any control of the plant, since it is easily identifiable compared to when it is blending in with the rest of your turf. 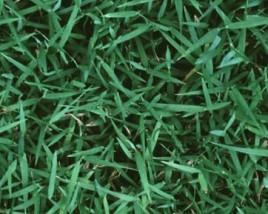 Chemical control of nimblewill in turf has proven to be difficult since the best chemical controls are non-selective herbicides (such as round-up) that can also damage your desired turf grass species during application.  The best way to control nimblewill is to physically remove it from the lawn, roots and all, and introduce a desired turf grass seed into the area.  If your lawn has small, contained patches of nimblewill, it would be best to rake these areas out, completely removing the plant, and then spot seeding the areas.  If you have large clusters, or extensive amounts of nimblewill on the lawn, these areas should be completely raked out and then either slit seeded or filled in with aeration & seeding. 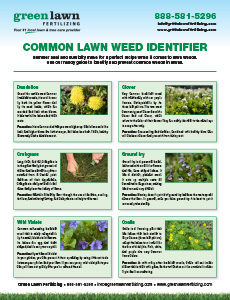 Keep common weeds from invading your beautiful lawn with this guide.