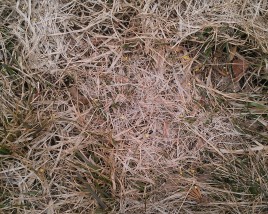 As we are getting into the full swing of applying Round 1 treatments here at Green Lawn Fertilizing, we are seeing an abundance of Snow Mold on lawns throughout our service area.  This is a fungus which is highly common in the beginning stages of the lawn care season as we try to exit the cold, harsh winter weather and head into the spring.

There are two forms of snow mold, Gray Snow Mold (Typhula Blight) and Pink Snow Mold (Microdochium Patch).  The Gray Snow Mold is the more common of the two, and the strain that we are seeing running rampant at this time.  Both varieties of the disease are generally not a major threat to the turf except in severe cases.

The pictures above show Snow Mold found on an audit that was completed on 3/24/14, almost every lawn our technicians are visiting has Snow Mold present to some extent.  It can easily be identified by the appearance of small to large blighted or straw-colored grass. These patches generally appear to be “matted” down, stuck or “glued” together.  Snow mold can infect almost all types of grasses that endure prolonged snow cover or freezing temperatures. Snow Mold can actually infect a lawn without the presence of snow cover if the lawn experiences cool/cold temperatures combined with prolonged rain and overcast conditions.

So how can consumers control or prevent Snow Mold on their lawns?  It is no fun, but the most effective and recommended method to control Snow Mold that is present on your lawn is to get out the rake and lightly rake the matted/infected areas. This will allow air circulation to commence and naturally alleviate the infection. Green Lawn Fertilizing technicians are informing their customers who have the fungus on their turf. In some instances where the disease is on a larger scale, some seeding may need to be done to fill in areas that were harshly affected. Core Aeration & Seeding will help reduce soil compaction as well as help with thatch control, this will also reduce the chances of contraction. Lowering your mowing heights at the end of the season is also a good way to reduce the amount of turf that is able to be affected. Chemical controls will actually do little to change the infection, and should be used more as a preventative measure in the late fall, prior to any snow cover. Generally the first areas that you see the infection is where snow accumulates heavily from plowing/shoveling. Minimizing these larges piles of snow on the turf is also a great way to reduce a lawns chance of infection.

$15 Off Each Fungicide Application 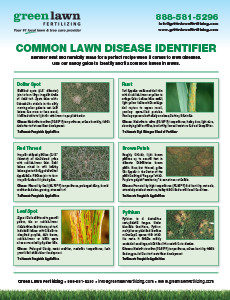 Learn the hallmark characteristics of diseases that are common to mid-Atlantic turfs.

Free Download →
Call Now
Our Message to the CommunityLearn more