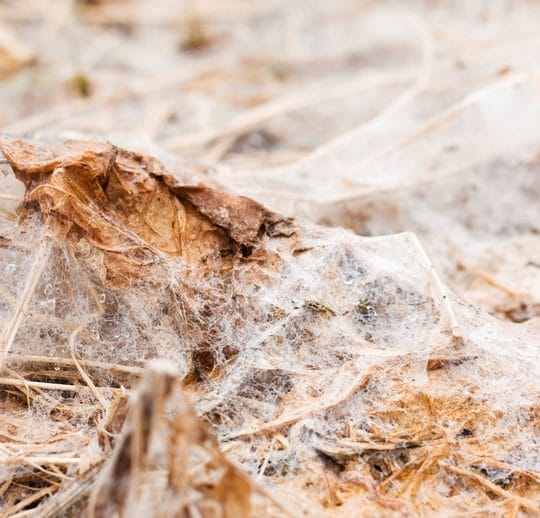 Brief Description: Gray or pink patches of mold in a circle of brown grass.

What is Snow Mold

Snow mold is a common fungal lawn disease in the colder, wetter parts of the United States. Though snow mold is only active during the winter and spring, your lawn can retain this disease during the summer if not treated properly.

Snow mold comes in two forms—pink snow mold, also known as Fusarium patch (Microdochium nivale), and gray snow mold, also known as Typhula blight (Typhula incarnata). Snow mold affects bentgrass, annual bluegrass, and Kentucky bluegrass, among many others. It affects grass that has been covered by snow before it has had an opportunity to freeze. The moisture underneath the snow allows snow mold, which is resistant to cold, to thrive, and by the time the snow melts the fungus has caused large patches of grass to become infected.

Signs and Symptoms of Snow Mold

The two forms differ slightly in structure and effect, and are often found growing together.

Both types of snow mold will leave yellowish brown, circular patches of grass behind as the colored mycelium on the grass dries out in the sun.

How to Prevent Snow Mold

Snow Mold can be prevented by mowing your lawn continuously well into fall, even after peak season. Long grass is more likely to fold over underneath snow and become a haven for the fungi. It’s also important to clean up leaves and trimmings, and remove lawn chairs and other material that may protect the grass just enough to stay moist underneath the layer of snow. For prevention and treatment, a fungicide may also be necessary.

Call Green Lawn Fertilizing today at 888-581-5296 and let's talk about how we can help you with Snow Mold and other lawn diseases.