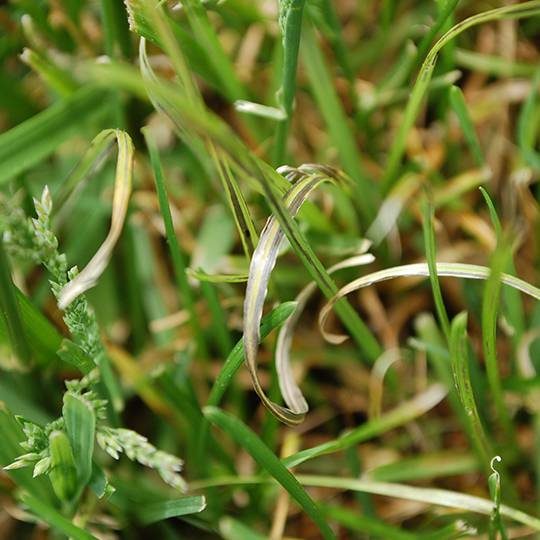 Brief Description: Shorter grass blades with thin yellow stripes along the veins of the blade that eventually turn grey or black and shred the grass into thin, curling strips.

What is Stripe Smut

Stripe Smut is caused by the fungus Ustilago striformis. It is a perennial disease, surviving cold weather in a dormant stage within infected grass blades or as spores in the soil. The spores of the disease spread through various means including wind, rain and mowing the lawn.

The disease is especially common in young lawns and new grass seedlings, as the spores of the disease can linger in soil and become attached to seeds as they grow. Stripe Smut can grow in regular patches, but may also cover large swaths of the lawn or even the entire lawn.

Signs and Symptoms of Stripe Smut

Stripe Smut appears in cool, damp climates between 50 and 60 degrees F. Spring and fall are the two seasons during which it is most visibly recognizable as itself. Initially, the infected grass will simply appear lighter in color than the surrounding grass. Soon after, dark-colored mycelium grow along the veins of the grass blades and eventually rupture them, causing the characteristic wilting and curling of the grass into thin, dark brown strips.

A very hot, dry summer following a Stripe Smut infection can cause affected grass to die, while a hot, damp summer can encourage the appearance of further fungal lawn diseases on the already weakened lawn that can also cause the grass to die.

How to Prevent Stripe Smut

As with most lawn diseases, avoiding treating the lawn with nitrogen in summer can help to reduce the likelihood of the appearance of this disease. Core aeration loosens soil and punctures thatch (built-up layers of organic material), thereby allowing for better drainage and reducing soil dampness. Planting turfgrasses resistant to Stripe Smut or reseeding the lawn with seeds treated with fungicide are also viable options for reducing the frequency of Stripe Smut infections on your lawn.

Stripe Smut fungicides should be applied just before the disease goes dormant for the winter, in late fall. An inch of damp soil’s worth of water should also be applied to soil that has been treated with Stripe Smut-oriented fungicides.

Call Green Lawn Fertilizing today at 888-581-5296 and let's talk about how we can help you with Stripe Smut and other lawn diseases.