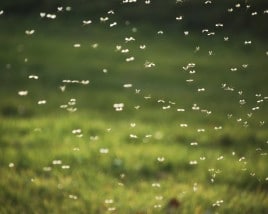 Planning on taking a trip to the beach this Memorial Day? What about Camping? Even if you are staying home and barbecuing you’ll want to be certain to purchase a good insect repellent. A good insect repellent can protect you from mosquitoes carrying West Nile virus and Aedes, St. Louis Encephalitis, ticks and other biting insects. Ticks can spread Lyme disease, human babesiosis and Rock Mountain spotted fever.

Not worried about Mosquitoes or other fever carrying Insects? Maybe you should be. In 2012, the United States witnessed some of the worst West Nile Virus cases the country has ever seen. According to the Center of Disease Control and Prevention, in 2012, Pennsylvania had the second highest reported West Nile Virus Human Infections of 60 along the East Coast next to New York. New Jersey reported 6 deaths and Pennsylvania reported 4 deaths in 2012, second and third highest along the East Coast. What was the state with the highest amount of reported cases and deaths? Texas. Texas had a monstrous 1,868 total reported cases and 89 deaths, more than tripling the cases and deaths of the number two state California. For more information on the reported 2012 West Nile Virus Human Infections in the US visit the Center for Disease Control and Prevention. Please refer to state health department websites for further details regarding State Case Totals.

Lucky for you, a set of brave testers went outside in Mosquito—infested cages and also let ticks crawl all over them. These brave souls recorded how long it took for mosquitoes to start biting and for ticks to crawl over treated areas. The results are in! Several tested repellents protected against deer ticks and mosquitoes for over eight hours. Four of those—Off Deep Weeds Sportsment II, Cutter Backwoods Unscneted, OFF FamilyCare Smooth & Dry and 3M Ultrathon Insect Repellent 8 contain deet in varying levels. The active ingredient in some insect repellents is oil of lemon eucalyptus. (It’s not recommended for children under 3.) Almost as effective was Natrapel 8-Hour with picaridin, which protects with picaridin.

Below is a list of items the homeowner can do to help the process of reducing mosquito activity:

Tired of being locked up inside because mosquitoes have taken over your yard? We can help take back your yard with our mosquito control program!

Green Lawn Fertilizing offers a 6 application Mosquito Plan. This plan is designed to control the population of Mosquitoes on the property. GPS will apply your first 2 applications within the first two weeks of signing up and will come out every two to three weeks after that. 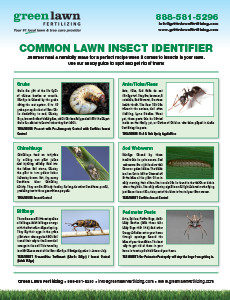